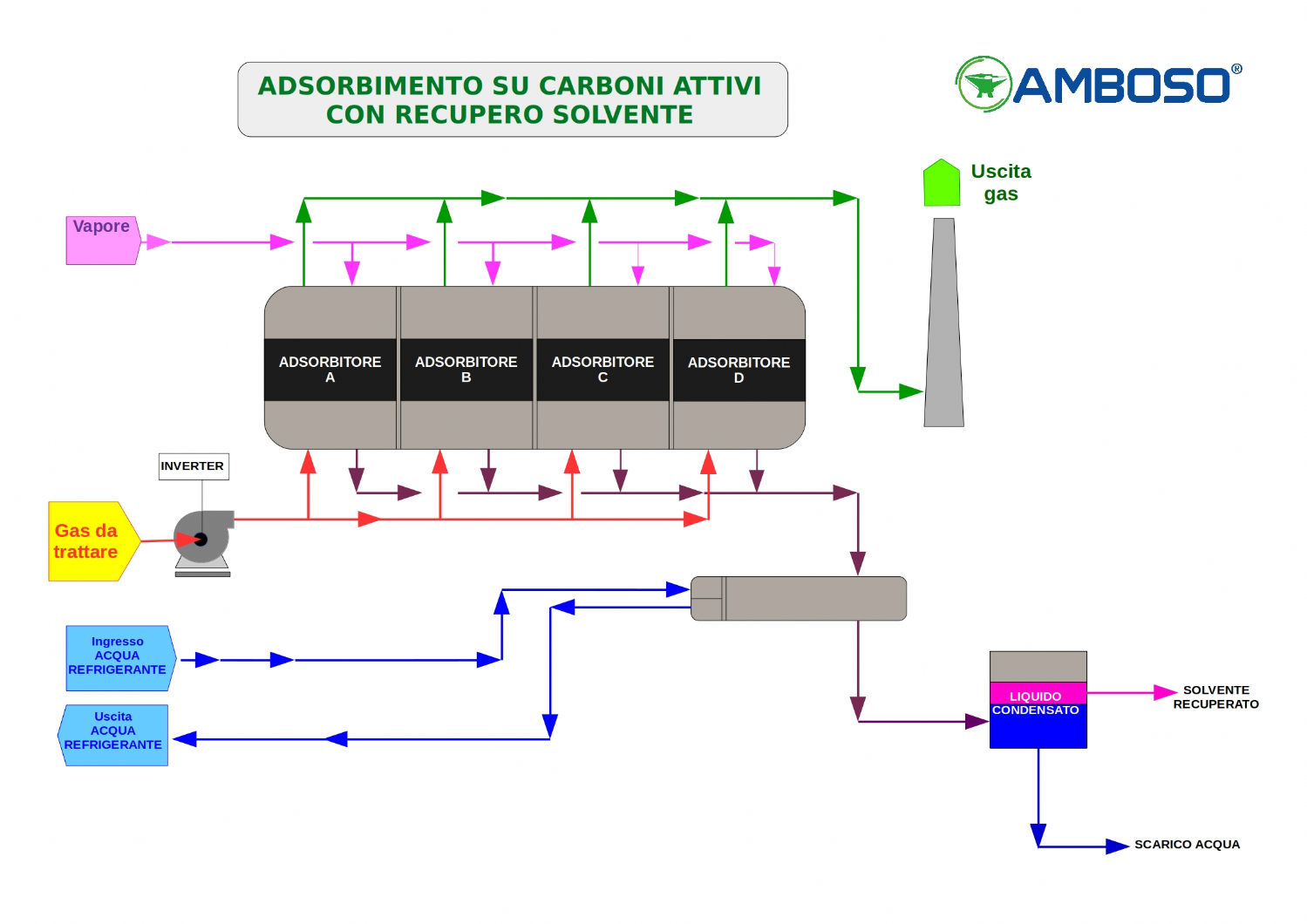 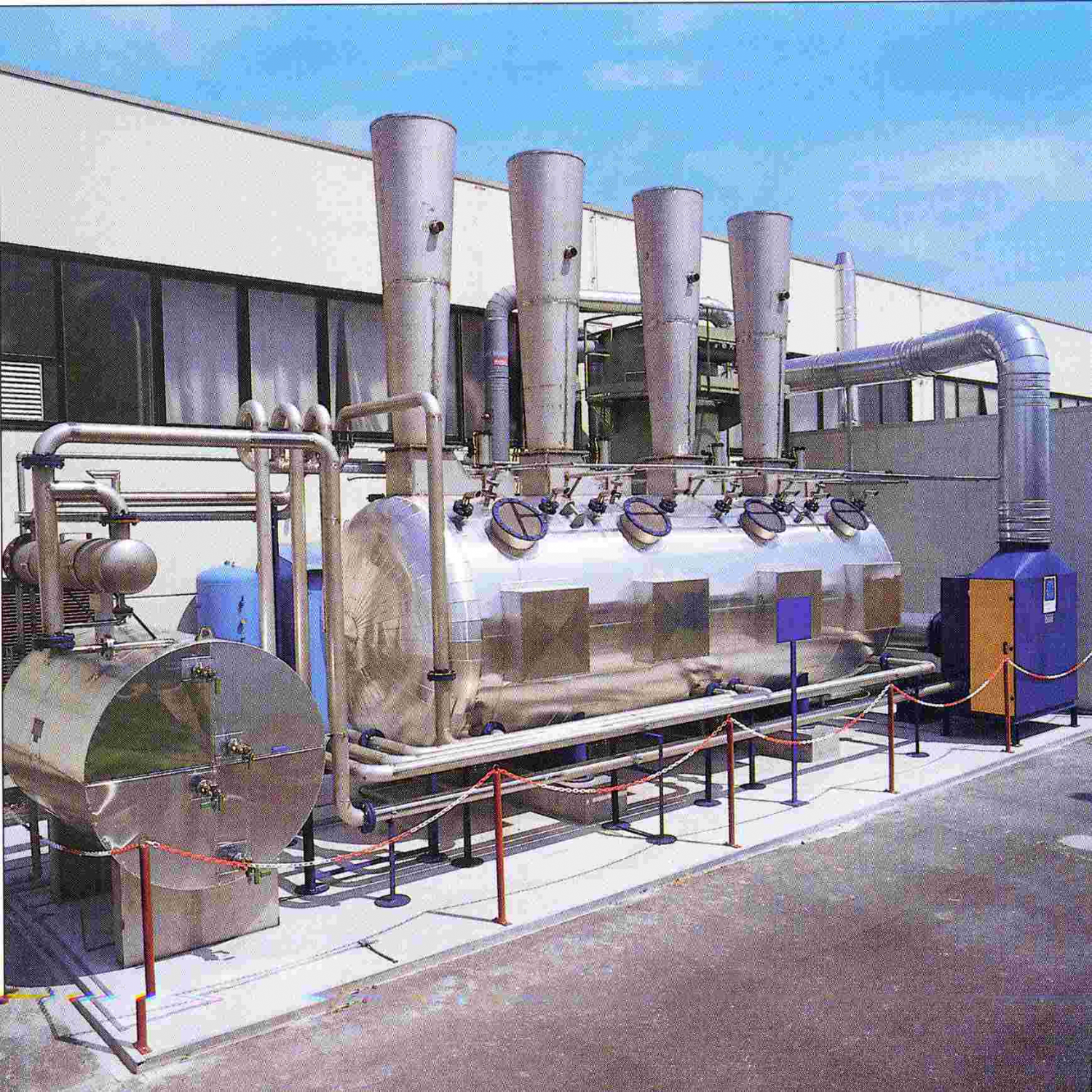 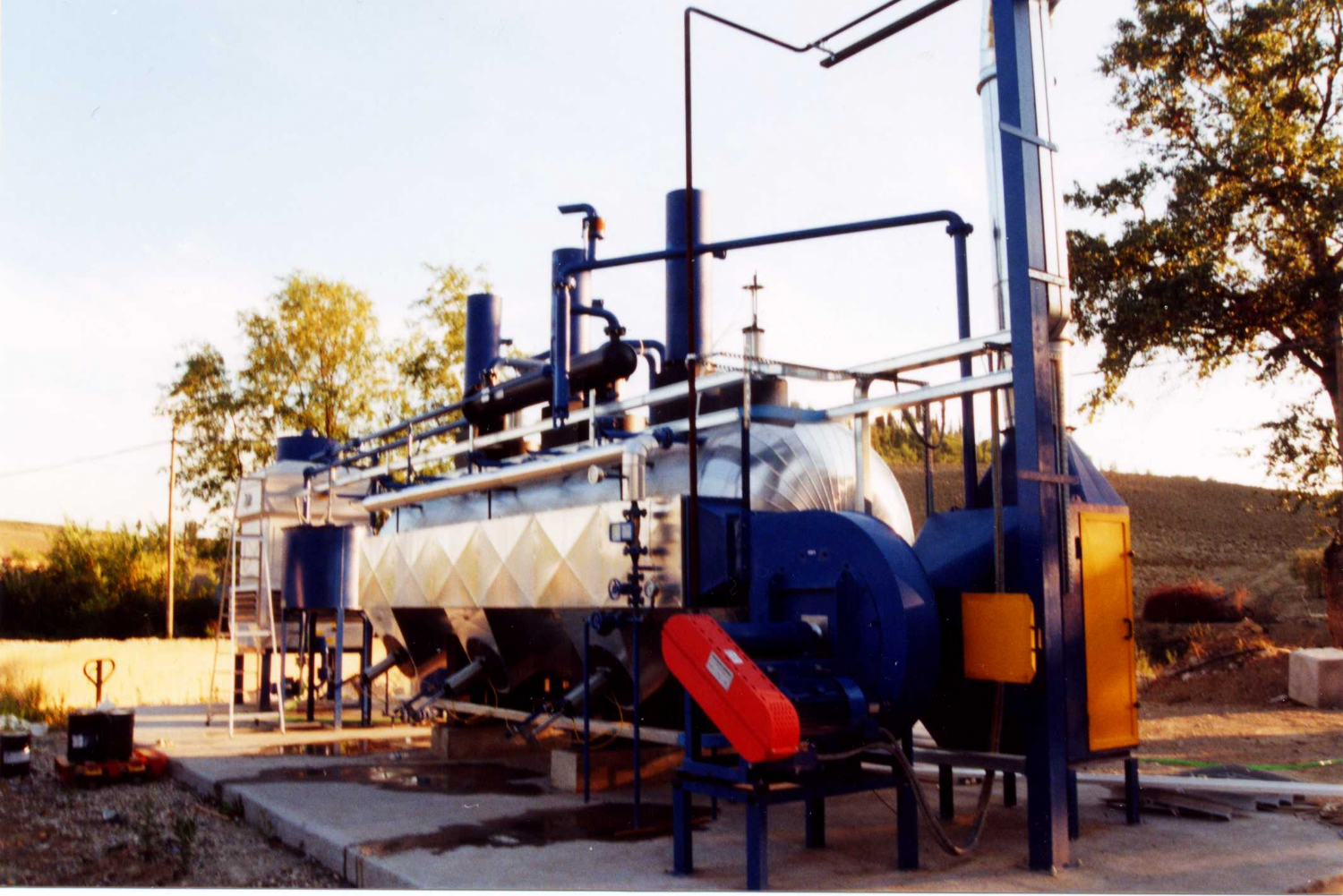 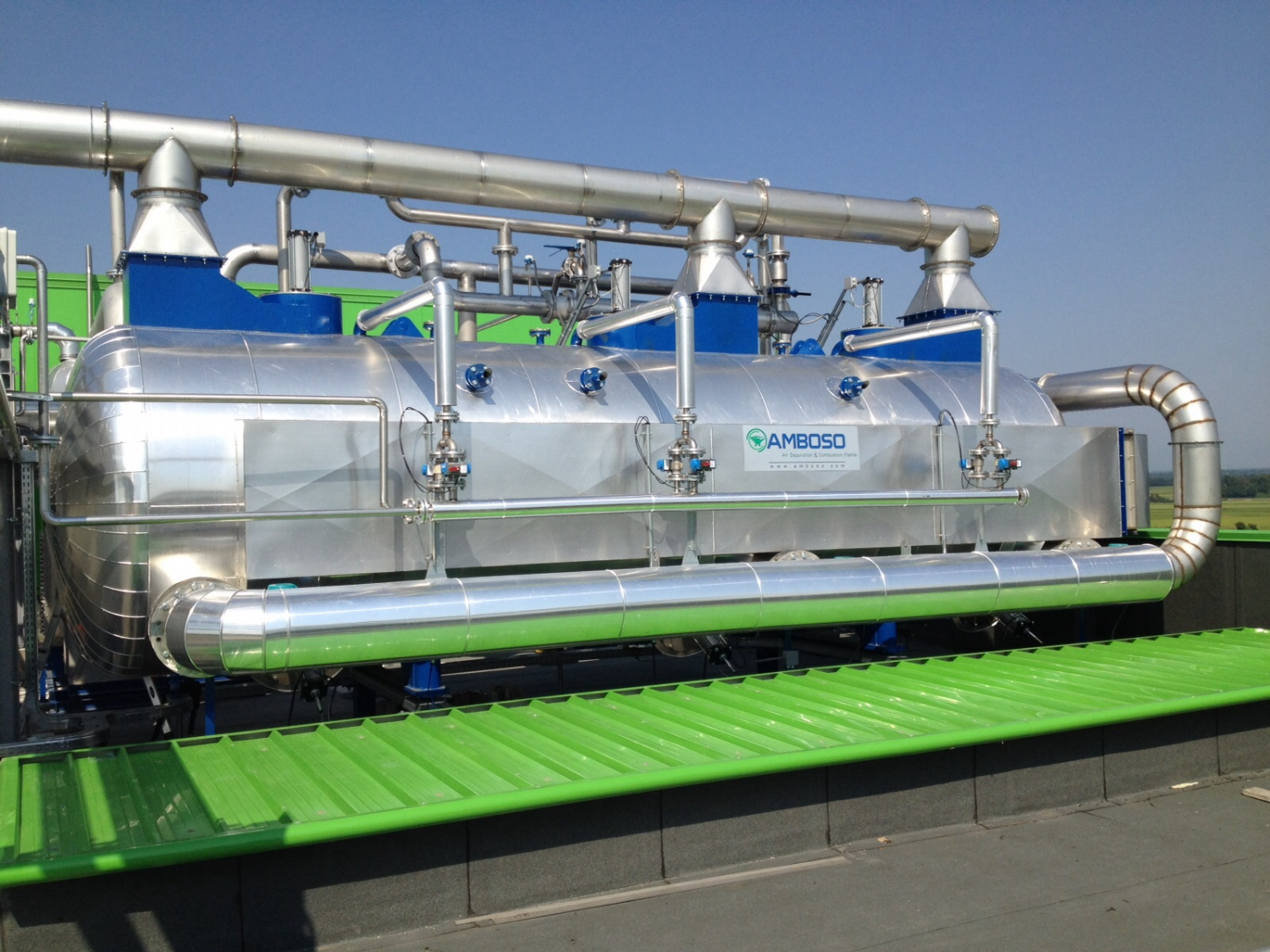 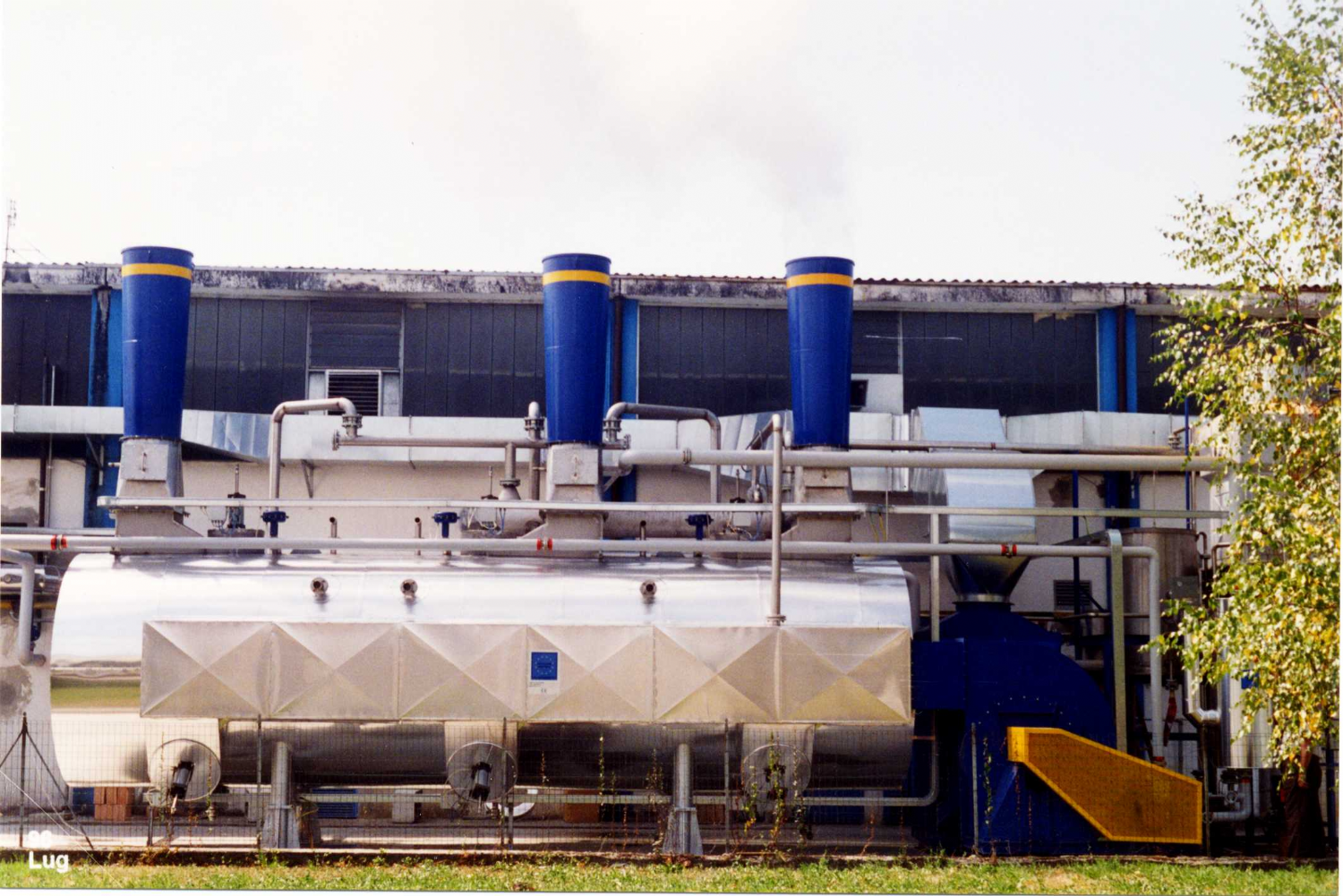 2. Contaminants which can be removed
Volatile organic compounds (VOC), the above plant is particularly suitable for cleaning air containing just one solvent.

4. Description of the equipment and/or process
“ To ensure a future, we must not destroy. Use solvents and recover them thus avoid waste and search for products and alternative systems at the expense of quality and with high costs”.
With this slogan dating well back to the early 1980’s when Ventilazione Industriale Srl was turning towards solvent recovery plants with steam stripping, the company wished to attract the attention of many industrial sectors including printers on paper, metal and plastic film, distilleries, paper mills, foundries, plastic coating firms etc. by informing them that it is now possible to make use of a pilot plant to define with a high degree of accuracy what should be the process and optimum running conditions to best optimize the proposed investment. Moreover the use of such plant is in line with the ecological requirements of the society in which we live, because besides guaranteeing a very certain saving in money, it allows full cleaning of the air saturated with solvent and removal of obnoxious odours emitted in the atmosphere.

The full recovery process can be summed up as follows:

The air stream contaminated with solvent vapours is first filtered and then sent, through forced exhaust, to the bank of activated carbon adsorbers. This captures the solvent present in the air so that the air can be discharged directly into the atmosphere via a stack.
Purpose of the upstream mechanical filtration is to capture any solid microparticles contained in the gaseous stream which would partly impair the adsorption capacity of the activated carbon. The adsorption phase is alternated with the regeneration phases at fixed intervals or when the activated carbon has reached the state of saturation to which corresponds a timed-weighted decrease in filtration efficiency of the air stream at the inlet. Duration of the adsorption and regeneration phases is normally 1 hour.
Regeneration, or desorption, is by a direct flow of steam which has the power to strip the solvent from the activated carbon so as to obtain a mixture of solvent and vapour at the adsorber outlet. With such technology, maximum use is made of the thermal capacity of the fluid and its latent heat of evaporation; this is particularly significant when the solvent contained in the dirty air stream forms an “azeotrope” characterized by a boiling point lower than that of water. The vapour/solvent mixture is subsequently cooled and condensed with the aid of a tube bundle heat exchanger and the cooling water then it is sent to a decanter where the following is obtained:
• a organic phase consisting of hydrated solvent
• a aqueous phase (mother liquors) consisting of water saturated with solvent.

The organic phase is extracted from the decanter. This organic phase is then dehydrated by means of a calcium chloride bed contained in a cylindrical tank, called drying column.
The dehydrated solvent is then sent to a distillation column where it is refined from residual impurities and is prepared for reuse in the production cycle. The mother liquors extracted from the decanter are sent to a reboiler unit whose function is that of extracting the solvent contained in them through low temperature evaporation, then they are sent to the condenser for recycling. The heavy aqueous phase, after solvent removal, is sent to an evaporating stage which holds a low temperature of the water used in closed circuit in the sections of the adsorption plant. The various manoeuvres of the plant are remotely set via a centralized control panel using compressed air at 7 atm. as servocommand fluid.
Option: to achieve a higher performance in dehydrating the recovered solvent, the plant can be provided with a storage tank feeding a high-performance drying azeotropic column.

4.2 Activated carbon solvent recovery plant, steam regeneration, “multi-cell single body” type
Description
This type of “single-adsorber” plant is particularly suitable for solvent loads from 4 to 60 kg/hour.
Use of the plant is very much simplified because, during the normal workday, no operation is necessary as its air cleaning function is self-contained.
Just at the end of the working day and only for a few minutes, it is necessary to regenerate the activated carbon with steam, thus preparing the plant for the next day.
Two distinct liquid phases are obtained after steam regeneration, namely:

-Consisting of liquid pulp which can be subsequently stripped.