Air pollution is the single largest environmental health risk in Europe, and can cause respiratory problems and shorten lifespans.

The European Environment Agency in its "Air quality in Europe — 2017 report" displays an updated analysis of air quality and its impacts, the evaluation of the status of air quality is based mainly on ambient air measurements from more than 2500 monitoring stations.

Heart disease and stroke are the most common reasons for premature death attributable to air pollution and are responsible for 80 % of cases; lung diseases and lung cancer follow (WHO, 2014).
In addition to causing premature death, air pollution increases the incidence of a wide range of diseases (e.g. respiratory and cardiovascular diseases and cancer), with both long- and short-term health effects.
The International Agency for Research on Cancer has classified air pollution in general, as well as PM as a separate component of air pollution mixtures, as carcinogenic (IARC, 2013).
Various reports (e.g. WHO, 2005, 2013a) show that air pollution has also been associated with health impacts on fertility, pregnancy, and new-borns and children.
air pollution mixtures
Europe's most serious pollutants in terms of harm to human health are PM (particulate matter), NO2 (nitrogen dioxide) and ground-level O3 (ozono).

Air pollution also can damage vegetation and ecosystems. It leads to several important environmental impacts, which affect vegetation and fauna directly, as well as the quality of water and soil. The most harmful air pollutants in terms of damage to ecosystems are O3, ammonia (NH3) and nitrogen oxides (NOx).

The figure below (published by the European Environment Agency) shows the effects of pollutants on human health. 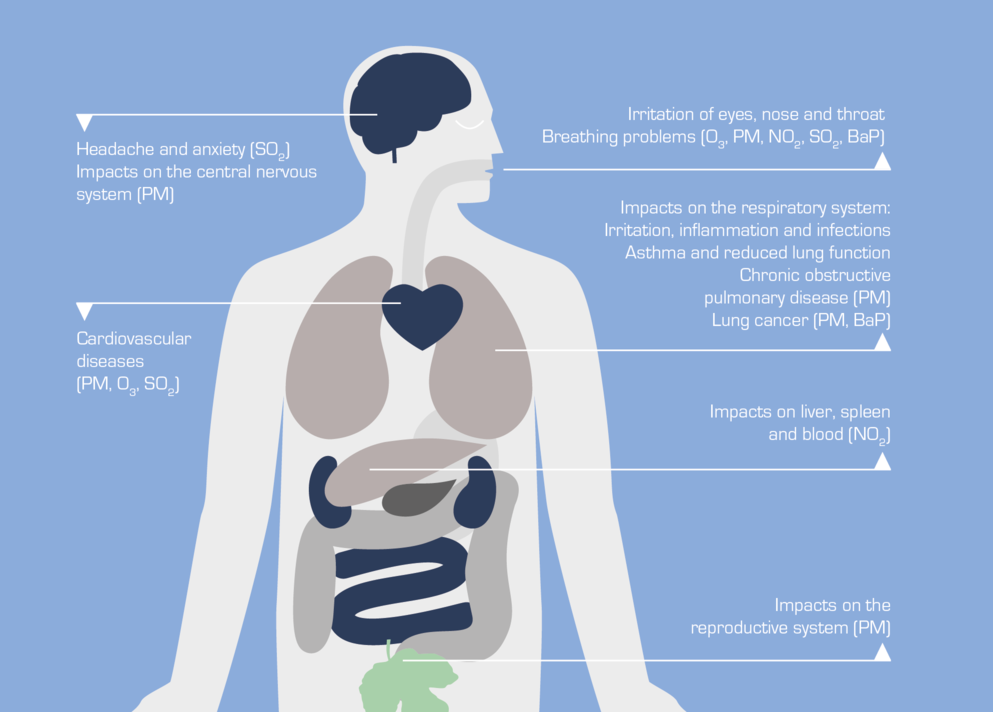