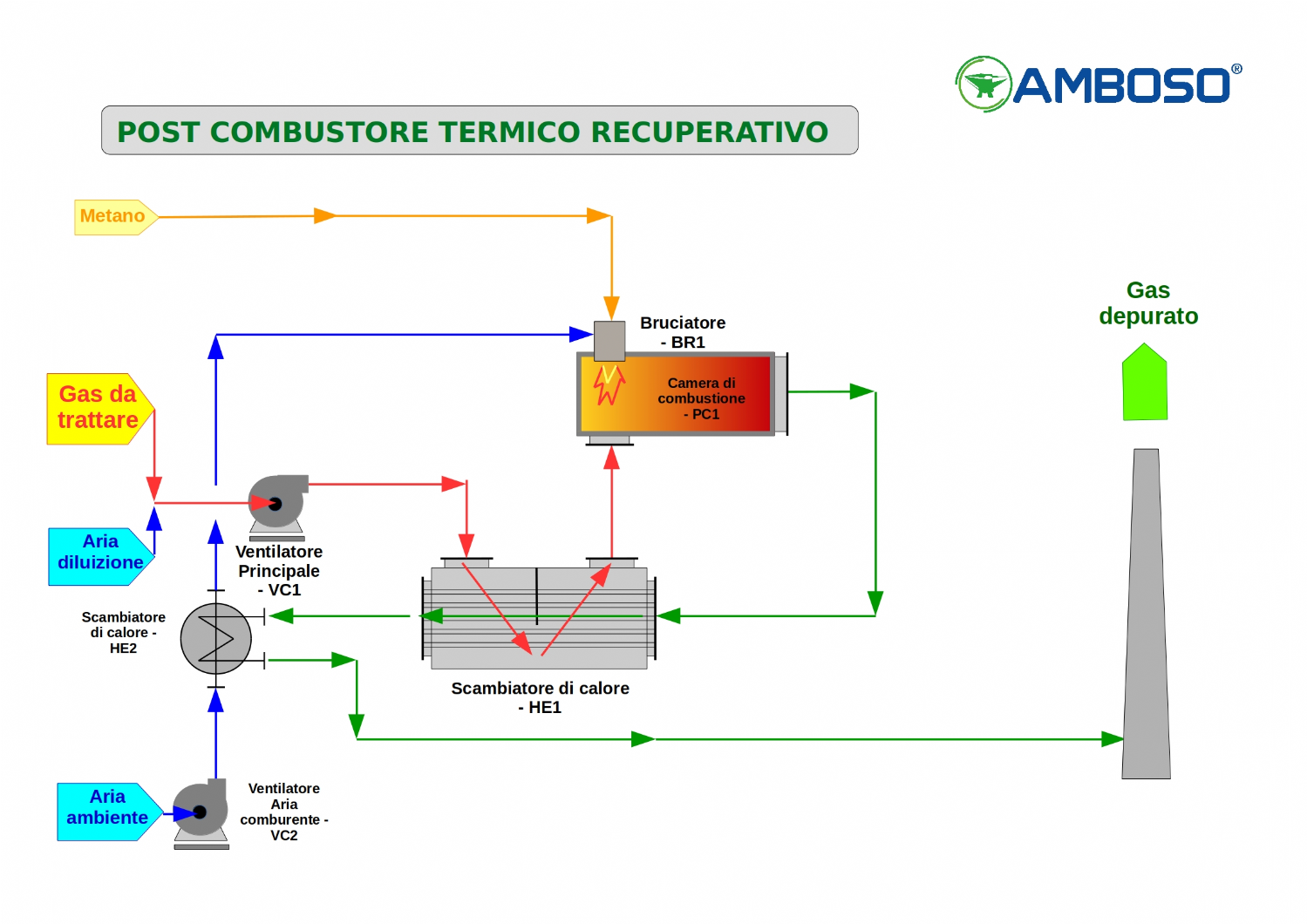 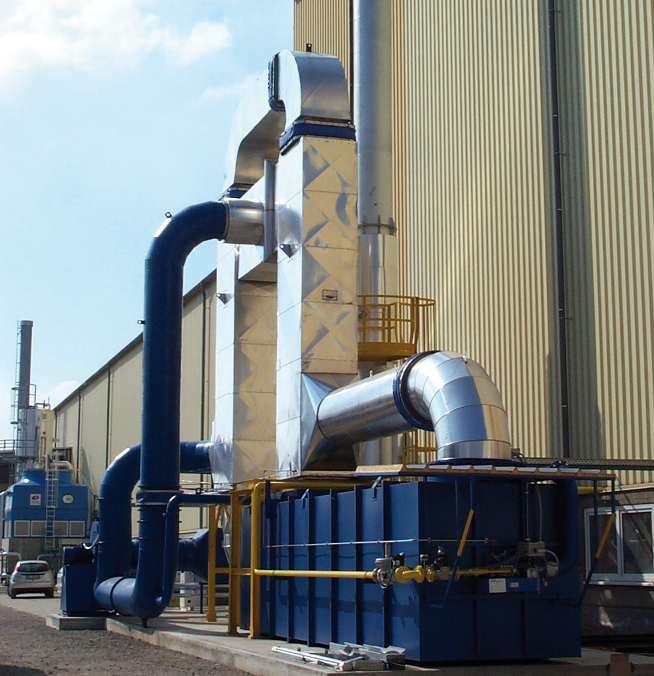 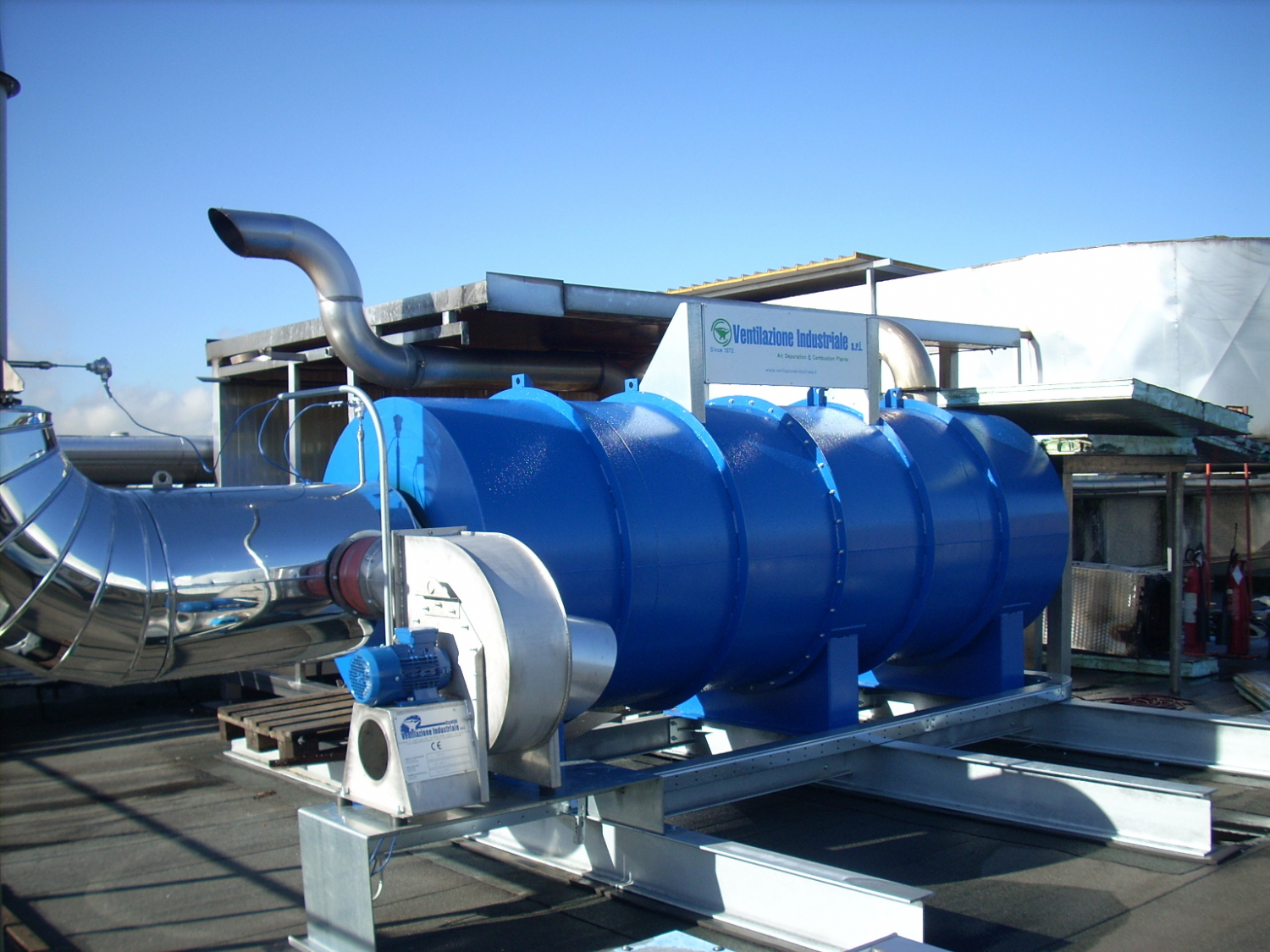 2. Contaminants which can be removed
All hydrocarbons

4. Description of the technical solution
The combustion process merely involves oxidation of the carbon (C-) and hydrogen (H-) atoms contained in the molecules of hydrocarbons and solvents to be burnt, whose exothermic reaction gives rise to the following products: carbon dioxide (CO2) and steam (H2O).
With reference to the attached process diagram, the plant basically consists of:
-centrifugal fan VC1
-tube-bundle heat exchanger He1
-tube-bundle heat exchanger He2
-postcombustor PC1
-burner BR1
-stack.
The extracted fumes flow first through the panel filter and replaceable envelope filter media, where the entrained resin and fabric particles are captured.
After extraction the fumes can be diluted, if necessary, with ambient air taken from outside so that the max. solvent concentration, measured by a LEL % detector is not constantly above one third of the L.E.L. (Lower Explosion Limit) of the extracted mixture.

The fumes diluted with air are extracted with centrifugal fan VC1, which forces them first in the shell side of heat exchanger He1 via valve V2 and then in the shell side of heat exchanger He2. Next they enter postcombustor PC1.
While flowing through the shell side of the two above-mentioned heat exchangers He1 and He2, the fumes are preheated up to temperatures of 450 - 650°C at the expense of the heat given up by the gases of combustion flowing out from postcombustor PC1; subsequently the gases of combustion flow through the tube side, first of heat exhanger He2, then of heat exchanger He1.
Inside the postcombustor, the fumes containing the VOC to be destroyed are heated further up to a min. temperature of 770°C thanks to the energy freed by the combustion of natural gas in burner BR1and by the thermal oxidation of the VOC contained in the fumes, until the formation of carbon dioxide and water.
The gases of combustion produced when flowing through the two heat exchangers He2 and He1 on the tube side, are cooled and are then emitted into the atmosphere at the min. temperature of approx. 350°C.
The plant is controlled in fully automatic mode, in both switching on/off stages as well as during normal operation, thanks to a Programmable Logic Controller (PLC), connected to analog and digital instruments, and a supervisory system on a PC allowing continuous monitoring and recording on magnetic support of the main process variables and operating/alarm statuses.
The plant is equipped with:
-a system for diluting the extracted fumes with air from outside via an automatic control valve ACV1;
-a system for automatic by-pass of the combustor in case of faulty operation, via servocontrolled valves V2 and V3;
-a system for controlling the heat exchanged / recovered in heat exchanger He1, in order to control the surplus energy when there is greater VOC concentration, thanks to by-pass valve V1 used in the outlet temperature control from combustion chamber TT2.